Help this game reach its goal

Welcome to St. Louis, the City of the Arch. Beyond Backwater and the border of the American Lands lies the City of the Arch, a diamond in the rough and a trove of Old World artifacts for those who wish to strike it rich, uncover lost technology, or shed light on this nation’s catastrophic history. Drawing curious researchers, skilled prospectors, and desperate scavengers from across the continent, the ruins of the old city are a vast urban jungle, crawling with danger but promising a fabulous wealth of knowledge, technology, and antiquities—for those who survive. Are you willing to risk it all, scavver?

Backroads: City of the Arch is the first expansion for the Backwater: Southern Gothic Horror tabletop roleplaying game, and it funded on Kickstarter in June of 2022. It describes the Outskirts of a post-apocalyptic America, which spans from Arkansas to the Great Lakes including the ruins of an abandoned St. Louis.

Backroads Adventures is a collection of three one-shot adventures for the Backroads book. Each adventure takes the characters deep into the ruins of St. Louis. Want a preview? Check out the media section below, which includes actual play previews for these adventures. The book also includes adventure hooks for characters to explore within the city of Meecham.

Adventure 1: The Secrets Within.

As Old World technology becomes "slim pickens" within The Village area of the ruins, scavvers grow more and more desperate. Yet, one of them -- a man named Blake Watson -- has struck it rich somewhere deep within the Tangle. Every day he brings back old medical equipment and loads of copper wiring. But things start to heat up for our adventurers when they discover his corpse at the edge of the park and a mysterious map in his back pocket. Could it lead them to treasure or Old World knowledge? What secrets lay within the ruins? And what dangers lurk there as well?

A group of scavvers is hired a locate a mysterious plant cited by several other expeditions during their travels. This small and mysterious bush produces little red fruits, the bean-like seeds of which can be dried, ground, and steeped to create a potent brew. The person who hired the crew, a rich merchant from the Heartlands, believes this to be a “Coffee” tree from the legends of the Old World. However, these trees are not known to grow in St. Louis. The patron suspects the plant is within an abandoned plant conservatory and botanical garden, hidden within a notoriously dangerous part of the ruins called “The Tangle.” If the scavvers can survive the trek, what will they do when they discover the prints of a gigantic beast within the botanical gardens?

While other scavvers go into St. Louis looking to salvage technology, this group of scavvers has been hired to locate a rare animal spotted within the abandoned city. Nicknamed “the Golden Pheasant,” this bright-colored bird has been sighted by several parties that recently dared to go within the Tangle. The party has been hired by Hieronymous Dahl, a mid-tier executive for the powerful Providence Trading Company, which operates out of the city of Meecham, across the river. After arriving at the abandoned city, the scavvers gather information about the bird and where it was sighted, learning that most parties never go beyond the Tangle and that spotted the bird went as far as the labyrinthine Ruins, where the bird was spotted among a densely-wooded park that is supposedly home to an ancient, Old World zoo.

The game will be available by March 2023, at which point the Backroads ttrpg will also be available. The PDF will be uploaded to this page, and we'll notify you via itch and at your preferred email.

Backroads hit its funding goal on Kickstarter; however, we only hit our first stretch goal. Now, we've set up a preorder page on itch, and we thought we'd itchfund to see if we can hit any more stretches before the game releases . We're also on itch for players or fans who are ethically opposed to pledging via Kickstarter and missed the campaign.

If you grab a Backroads PDF or hardcover during the Kickstarter or through the itch sale, you'll get any of the bonuses that we reach below - for free. Purchase of Backroads Adventures contributes to these goals; however, you must purchase the Backroads PDF to receive these bonuses:

What do we get? A bonus adventure which can be used to connect a New Orleans game (Backwater) to St. Louis (Backroads). In this adventure, someone has made several attempts on the life of a prominent citizen, Hamilton King of the Providence Company's New Orleans branch. Your characters are hired to investigate... and to keep King alive.

What do we get? You'll get a solitaire adventure set in New Orleans, which continues the "Eulalie's Curse" solitaire. A corpse washes ashore along the banks of the Mississippi in New Orleans, and it causes quite a stir when the gathered crowd realizes who it is... Plus, you'll get VTT tokens for monsters/NPCs.

What do you get? A solo journal game, which can be used to simulate travel between destinations in the Outskirts. It can be played outside a campaign for fun or within a campaign. It's another cool travel option for Backroads, which already has basic rules for exploration as well as for travel montages and hexcrawls. All of the options are at your fingertips.

Do you love the Backwater universe? At this stretch goal, all backers receive a piece of short fiction (ca. 60 pgs or 15k words) written by our very own Alex Johnson, set in post-apocalyptic St. Louis.

If we hit this stretch, you'll receive between three or more works of short fiction set in the Backwater universe, including New Orleans and St. Louis. Pieces will be written by Alex Johnson, Asa Olson, and a guest writer. Fulfillment

You can find more information about Backroads in the following links:

Asa Donald (he/him) & Alex Johnson (he/him) are the creators, designers, and primary writers for the Backwater series. They became friends years ago through a friend's ttrpg group. They remain friends after moving to different wards in the American Lands. Icons by Collin Wilhelm.

Get exclusive access to this game by purchasing while quantities last.

Three miniature adventures for the Backroads: American-gothic Horror setting. This PDF will be available before March 2023.

You will get access to the following files when they are released: 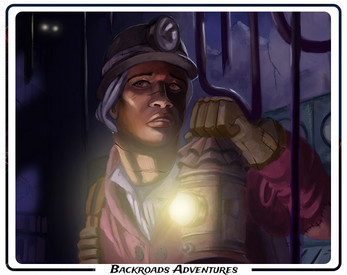