Help this game reach its goal

Long after The End descended upon the Old World... humanity started to rebuild itself, albeit wretched and forlorn. Survivors salvaged what they could of government in the form of the American Lands. They rebuilt roads, though in fewer numbers and inferior quality, and they reclaimed the skeletons of buildings. Nowhere does humankind rebuild so desperately as in the humid swamps of the Backwater, where humanity battles itself and the natural elements to survive. You are a warden here—a roaming peace keeper in the American Lands—protecting order at civilization’s southern reach. You travel the Old World’s crumbling roadways among mosquitoes and snakes. You tend to every small town’s big secret, and you quell strife between old families in a new era. Here in the bogs, you keep mutation at bay, ever-watchful for the wretched cousins of ancient humanity. You protect mankind from supernatural horrors that have only started to emerge.

Welcome to Backwater... where horror writes itself.

Backwater is a tabletop roleplaying game in the genre of southern gothic horror, set in a post-apocalyptic New Orleans. This game explores social issues relating to fear, poverty, religion, and alienation in its southern U.S. setting. Prominent among the genre's themes is a conscious criticism of superficial values and regional or familial history, depicted through the region's decaying structures and aristocratic families. It contains the supernatural, though the true horrors are often humans themselves. Backwater is set in a post-apocalyptic future with a tenuous social order, and it reimagines the genre as a reflection on issues in not only American history but also our present world. Players take on the role of wardens—roaming peace keepers in the American Lands—protecting order at civilization’s southern reach.

The Backwater ward is a region in the Deep South of the United States. Here, in the newest and most economically disadvantaged region of the American Lands, society is trying to rebuild its rotting structures and revive its decaying values. Swamp communities, fishing villages, and trade posts dot the bayou, all tenuously connected to one another and dangerously isolated in an increasingly hostile world. The exception–New Orleans, the ward’s gleaming diamond–proves this rule. The Crescent City forms one of the largest municipalities in the American Lands and features a cosmopolitan mosaic of polished wealth and grinding poverty. Corruption seems endemic and inescapable here, but idealists and pure hearts dream that New Orleans can be something more: a beacon of hope in an American wasteland.

Backwater uses an original game system, now called the Backbone Tabletop Roleplaying system. You can also find most of the essential rules in the Backwater Quickstart Guide.

The Backbone game system uses a 20-sided die for everything except damage. It is intended to be intuitive and streamlined. The foundation of this system are four basic attributes that provide both a modifier (which you add to rolls) and a goal score (which others roll against). When you attempt a skill roll against another character, you simply roll against one of their attribute goals, for example:

Characters have both Health Points (physical stamina) and Resolve Points (mental fortitude), and they are relatively low to reflect human fragility. Combat scenarios are consequential and can move quickly as a result. One especially unique element of the system is its Health rolls and Resolve rolls. Players must try to roll under their current Health or Resolve with a d20 to avoid suffering a condition, like the Bleeding condition. The more damage or duress that a character receives, the more likely it may suffer the condition. To learn how to play, try our solitaire game.

Character sheets for the Backbone game system are form-fillable PDFs. The Backbone system also has its own GM sheet for note-taking and tracking. We are also building a character sheet on Roll20.

Want to See it Played?

Check out the actual play with the creators.

You can also find some actual plays for Backroads, the expansion to Backwater:

What are people saying about our game?

"Backwater has a lot of unique ideas and mechanics. The gamebook is around 200 pages and is stuffed with content. ... I like that they dedicated a chapter to just the bare bone rules, which makes it a great quick reference to jump to if you are having a dispute at the table and you can find it very quickly. ... I really love that this book has a sub chapter on the secrets of Backwater. These include mystical items and story hooks which are both an entertaining read and make great inspiration or planning tools for a game."  -TheAbleLexi of The Gaming Table

Wendigo Workshop's review says that the Backwater TTRPG is "quite easy to pick up, and the character creation tutorial is simple to follow, making it easy to make new characters for the first time. [...] Backwater is a very good game, and a nice addition to fans of the horror genre."

The Weaver of Worlds shares a summary of the Backwater setting.

Backwater was selected as one of the top TTRPGs in the Trans Rights in Texas bundle by Roundish Whale and Tech Raptor.

Some comments from our customers:

A Statement on Race and Racism

Much southern gothic fiction has confronted the South’s ugly history of racism. It has sought to undermine idealized, antebellum values relating to slavery, reflecting society’s moral decay in crumbling buildings and conflict-filled families. It’s a pointed focus of more recent works within the genre, as some early literature reinforced racism in the process of confronting it. Racism is not a theme in Backwater. Backwater seeks a careful balance: to establish a setting in which everyone can comfortably roleplay, without erasing or ignoring centuries of oppression.

The American Lands emerged from the apocalypse just as racially and ethnically diverse by modern day’s standards, especially in New Orleans where many residents descend from African American and/or Haitian, German, French, or Spanish, Vietnamese, and Native American ancestry. Many stereotypes and inequities built around skin color and regional ancestry faded after The Old World ended in Backwater—they are not built into the game. Of course, figurative ghosts of slavery and racial oppression haunt the American south as a setting, including its structures, monuments, and cemeteries. We cannot forget this history or pretend that it did not happen, and we strongly encourage game masters to carefully consider the implications of custom settings before running a game.

If a game master is uncertain, we suggest they converse with their players first and use a tool like John Stavropoulos’s X-Card system to edit out uncomfortable or triggering content.

A Statement on Disfigurement and Disability

Backwater departs from southern gothic fiction in its treatment of characters with deformity, disfiguration, and disabilities. Although characters with short or tall stature, missing limbs, and affected cognition are commonly represented in southern gothic literature, some fiction including southern gothic, sci-fi, and fantasy depicts deformity and disability in the style of the “grotesque,” which invites audiences to gaze with fear, pity, or disgust. A common theme in southern gothic dictates that bodily disability and mental illness are manifestations of an inner or regional corruption of morals. More recent literature seeks to disrupt these ableist notions. We hope Backwater can do the same while representing a diversity of people with disabilities.

As in reality, the people of Backwater have disabilities; many of these disabilities are invisible; and they make people unique without necessarily defining them. Physical, cognitive, and psychological disabilities are even more ubiquitous as a result of The End and the American Lands’ harsh environment. Backwater presents a world where disability does not necessarily equate to suffering and people with disabilities are consciously represented—not only as victims and villains but also as heroes and everyday characters. We recognize that our efforts do not explicitly confront ableist notions or perform advocacy, but we do hope the game represents disability respectfully. We encourage game masters to carefully consider how/whether they incorporate these themes in Backwater, perhaps beginning a discussion with the players and ensuring that they do not accidentally represent disability or deformity as the “grotesque” of bygone art and literature. A game master and participants may wish to use a method like John Stavropoulos’s X-Card system to edit out uncomfortable content.

Written and designed by Asa Donald.

Sensitivity Readers: Margeaux Weston and CB Lee. Backwater was reviewed for sensitive content relating to New Orleans, disability and disfigurement, and race—particularly Black American and Chinese- and Vietnamese-American experience. Readers' identities aligned with the topic of their reading, yet sensitivity readers do not guarantee the cultural sensitivity of a product. The author takes full responsibility for all misrepresentation and bias.

What else do we have?

Check out some of our other items on itch:

Or purchase our Core Rulebook hardcover through Lulu.

In order to download this game you must purchase it at or above the minimum price of $13.60 USD. You will get access to the following files:

Support this game at or above a special price point to receive something exclusive.

Community copies are for those who cannot afford them and/or marginalized individuals. We add a free community copy of our core rulebook to the pool for:

Community copies are updated at the beginning of each month. 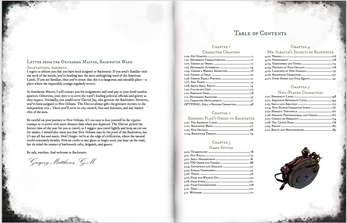 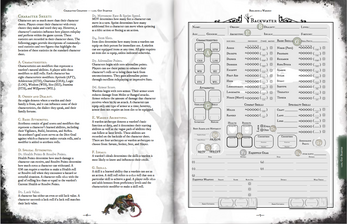 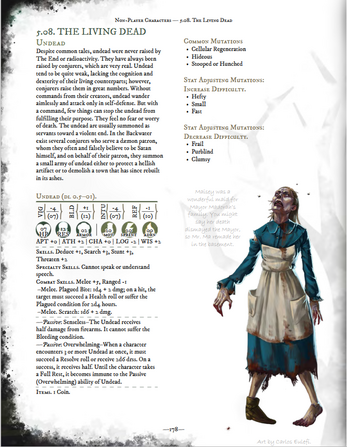 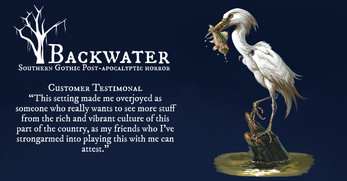 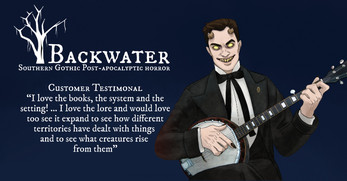 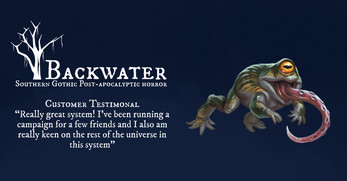